Well, the browser wars are “so 2010” (IE sucks, that’s true) . I don’t intend to make yet-another-benchmark to measure the speed of the browsers, or something like that. There are already lots of them (although the results seem predictable: Chrome triumphs in Google’s suite of test, Firefox leads with a big margin on Mozilla’s suite of test, so forth). In this post I just note some Pros and Cons of Firefox/Chrome, performance aside.

TL; DR : Firefox regains my love at the moment, as Firefox 18 has some nice improvements, and Chrome 24 still has some drawbacks which is more and more annoying over time.

Ok, here are the points.

I don’t want to compare the performance here, it does not mean speed is not important. Rather, I meant the difference of that between Chrome & Firefox now is very small (trivial).

I don’t have some numbers to back it up, just wanted to says from my experience as an end-user: The speed of loading a page (tab) of Firefox 18 and Chrome 24 is both fast, and the users hardly feel any difference.

This used to be the second strongest point of Chrome (make it “slim” browser, whilst fastest loading). Firefox was bloated then, in contrast.

Surprisingly, per each new version Chrome becomes more and more memory-hogging, whereas Firefox does a good job at keeping memory low . Perhaps Firefox made a good decision to have a separate process to handle plugins (plugin-container) , meanwhile Chrome thinks separate processes for tabs are too much of an advantage and they can abuse them for JavaScript/HTML loading.

Not just the feeling of user, this time I calculated memory of processes by several ways: from the OS task manager, or using the Chrome Task Manager, or the about:memory of Chrome. They all result in the same thing: with the same tabs (10 tabs, same URLs), Firefox 18 just takes about 60-70% RAM comparing to Chrome 24 . Even when we count out the plugins/addons.

Big thump up for Firefox this time!

(as a coder, I’m sure it’s hard to prevent the darn memory leaks, especially together with optimize speed) 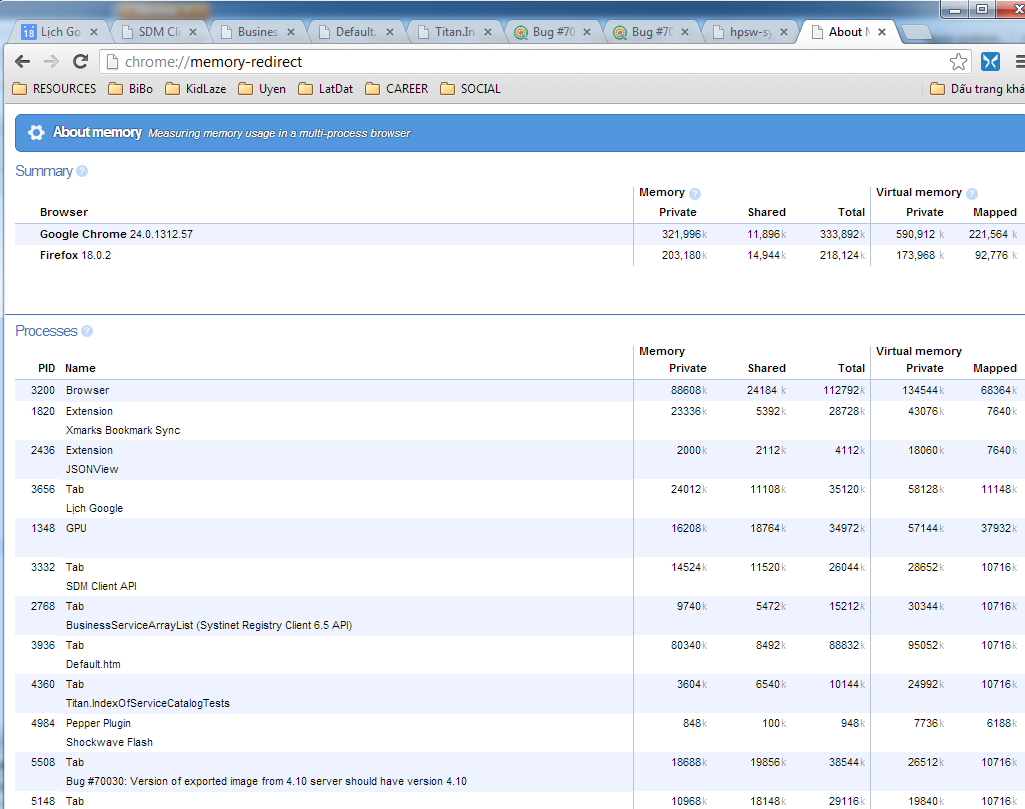 One of drawback of Firefox was the plugins compatibility, when upgrading version. It got worse when Firefox adjusted the major version strategy (for marketing/competition reasons).

However in recent versions, Firefox has made it easier to check plugin updates after upgrading. It also improved the build-in search of plugins, and introduce a seperate service for updating, and even allow plugins developer to “jump” wildcard versions. Hence, the original problem is solved.

Chrome now is more open to plugins, but it still makes “install” button disappear from Chrome Store, if the version is not compatible WITHOUT telling the user so. I think I’m a “tech guy” , or at least a power-user, but still was confused with that for some minutes (why I can not see anything to download/install at plugin page on Chrome?) .

And the plugin at my time was “JSONView”, which highlights an important missing feature of Chrome: XML viewer (and JSON viewer). This has been reported to Google Chrome long ago, in 2009 (more than … 10 major versions), and they still ignore it, hmm ?

(If you count it from the original RSS/ATOM issue, it was even 2008)

Chrome was designed to install in a “strange place” at that time: %UserProfile%\AppData\Local\Google , and there was no way to change it!

I guess it was so that the data can be “per user” , but on Windows it is a problem because the data will soon make user folder become big. And to make it worse, Chrome update service can not cleanup old versions! So, with new versions (I would say, monthly), the user folder on Windows gets more than 200MB for each new release (not only major versions) : about 100MB zipped installer (data of new update), and the data in old folder of old version app.

Firefox upgrade/installation is much “thinner” , the installer is 18-20MB and when exploding it takes about 40-45 MB of app data. It can upgrade (or should I say, cleanup its mess) well . Preserve user data is understandable, but what’s the point of saving old versions of the Chrome ? (at least 99.99% users of Chrome will not “downgrade” their versions, especially with such autoupdate service of Chrome.)

If I recall correctly, recently (after 2-3 years since the first proposal) Chrome has allowed to install the app “system-wide” , but not easy way: by some steps which may confuse a “non-tech” user (why don’t they include the step “custom folder” in the traditional installer?). So, lot ofs users may keep wasting spaces for Chrome, and that’s make the “quick & silent upgrade” of Chrome looks like a burden!

Both browser provides the “remember passwords” feature, that’s a good one. But it’s also a security threat. Firefox can prevent it with “master password”. Chrome, none.

Therefore, anyone who has access to your computer for 5 minutes can steal your passwords very easily from your browser (Chrome) !

Also, not sure if with “open” saved passwords like in Chrome, sometimes a “snoop” service will submit your passwords to a certain site without your permission. For example, some virus backdoor (hint: winmail, conhost), or to serve M$ competition strategy, or to serve the US Department of Defense .

This “feature” has been existing for years, and Chrome seems not care to fix it ;-) .

So, “Dear Chrome, I have just made up with my old friend Firefox. I guess I will spend time with her a bit more than before. And I hope you don’t mind ;-) ” .

UPDATED: In incognito mode (Private Browsing), Firefox seems to take much more memory than Chrome. And if you enable the menu toolbar, Firefox just looks as ‘normal mode’ except the small text “private browsing” at the end of window title. So for this incognito aspect Chrome is obviously the upper-hand. I look forward to FF improvement for this in the future.

A coder, husband and brother...
View all posts by DucQuoc.wordpress.com →
This entry was posted in Linux, Marketing. Bookmark the permalink.

3 Responses to Firefox over Chrome?